So the Yorkville 5K was the past weekend. The race was great and a lot of fun and all that stuff. It was nice to some folks I hadn’t seen in a while. It was nice to race for the first time in a long time. All that was very cool.

So the staging area and race area was at Jesse Ketchum Public School. I told my wife about some of the work I have done at the school, I work for the school board. The school is a great old inner city school which hasn’t changed much over the years, I love old schools with the thin strip hardwood floors and the cleaning smell. Jesse Ketchum is also where I first went to school. I went to the daycare there as well as part of kindergarten. I learned to play chess and had a best friend named Godfrey. I can easily close my eyes and see me on the blue mats at nap time or in the playground. Much of it is exactly the same. My brother used to ask on most days how many hockey cards I had won in flips or knockdown or closest to the wall. On most days it was quite a stack.

This past February I lost my mom. She was nearly 94. She was, as almost every mom was or is the greatest person who ever lived. Everything she ever did tasted great, made me feel great or was just another ordinary everyday miracle. One of her bits of magic was that from time to time she would pick me up from school and we would walk home. My mom didn’t drive and walked everywhere. The walk home was along Berryman St where there was a tiny penny candy store with a glass display, where for only a few pennies, you know me I am in the 50 + age group, you could buy a paper bag full on spearmint leaves, strawberry marshmallows etc. By the time we walked home to Ottawa St the bag was empty and my dinner was never spoiled. Those days didn’t happen often but enough so I keenly remember them.

One day, my kindergarten teacher called my parents to come into the school for a meeting. She told my parents that all I did was run around the classroom. My mom turned to me and asked if that was so. I told her yes and said that that’s what we were supposed to do. The teacher quickly corrected me with a “No, we are not supposed to run around the class and thats why mom and dad are here, it needs to stop”. My mom looked a little concerned and said ” Lawrence, stop running around the classroom, run around outside, perhaps in the woods”. So that’s what I have been doing ever since. I added the woods part but hey it is a trail running blog so I have licence.

My mom came to see me not long after that, win the 100 m dash in grade school and so many more races after that one. So mom, that Canadian 5 K 50-54 Championship is for you. In the place where it kinda started I thought of you at the finish.

Yesterday,yesterday it was when I started writing this post, I ran 28 K on the trails. It was hard, very hard. It was the longest run in a while and the longest on the trails since last year. It was an out and back from my house to Pottery Rd and up on the trails to Sunnybrook Park. Out and Backs are much harder than loops especially on the trails. You know the hills that you will have to go back up and you will be so much more tired than on the way out. I counted about 15 major up the whole side of the valley type hills. 8 on the way back. I believe that when I do hill repeats each one is worth more than the one before and the 9th or 10th is worth so much more than the first few. So this sort of logic also applies to long runs with lots of hills, each one harder and worth more than the one before it. This is one of the things I think about when I run. I think how this run is helping me, how the hard work is worth it. I take a bit of joy at the top of each big hill and try my best, no matter how tired, to take some joy in the strides I take away from the tough hill. I didn’t give up, yay me. I use the word “Nice” when I crest hard sections. I talk to myself, I like that there is most often no one around and I am able to be there on the trails by myself and communicating honestly about my running almost out loud. Sometime I think about treats, imagined or real that I will have “earned by running today”, usually imagined. Sometimes I think about how hard the Pottery Rd hill will be and then I dash that thought from my mind by immediately substituting in the ” You get up it everyday and you will today” thought. Yesterday on this very run I took a pretty awesome fall. I caught a root on a decent downhill slope and went crashing into the trail. Nice scrap on the arm and right knee. I lay on my back for a moment looking up through the forest canopy thinking “How did that happen and how badly am I hurt ?”. A fall happens from time to time, probably about once every 2 months or so on average. I often think about each section of the trail like a familiar friend, I know every bit so well, well except for the root I caught. It is comforting to cover and push through each section that is part of me. I do think a lot about how my body is feeling, How fresh/tired I am feeling, am I starting to breakdown ?

Everyday in a certain special part of the trails I take a few moments to remember a best friend in one of her most favourite places. Sometimes I see a friend or mountain biker I recognize and that is always nice. You smile at each others effort and resolve.

Mostly I try to stay in the moment of running. Most days I come up with some part of trail running that might be useful in the trail clinics. Like yesterday, which is not the same yesterday as when I first started writing this post, someone(s) left a ton of garbage on the trail at the bottom of a tough hill. Fortunately there was a box which I packed all of it in and then I thought I would just carry it all up the hill to where there is recycling. As I began running and carrying, I actually wondered what I might learn from this. I learned that running without being able to move my arms was incredible hard and made me wonder more about the function of arm motion in trail running/running. The box was fairly heavy and I also wondered about core strength and how important it is in running.

So these are just some of the things I think about when I am out on the trails. It isn’t auto pilot like road running though sometimes I probably should pay more attention to the trail and avoid wipeouts like yesterday which isn’t yesterday anymore.

So one of my favourite columns is the New York Times column, Sketch Guy. The fellow’s name is Carl Richards. He is a plain spoken ordinary dude who writes this column and the accompanying sketch that goes with it. His insights and ability to put everyday challenges into understandable bits is remarkable. He is able to present doable solutions to the problem before us. His examination of the problem solving chain is great in it’s clarity and exactness.

Lots of people, well a bunch of people ask me what is the key to running. “I want to exercise /run but I don’t seem able to find the motivation”. Ok fair enough. So let’s try to get more people out the door. Sketch Guy just did a column on writing and creativity. The basic idea was that you need to remove all obstacles that impede your ability to put your creativity into action. Note this is not removing obstacle to being creative it is removing obstacles to doing something with that creativity. The idea is once you feel creative you are able to go ahead. That means if you are a painter you have paints and an easel up and ready. So if you are a runner or aspiring runner that means you have shoes and clothes and a plan of where you will run already in place so that when motivation or free time is there you can go run. No excuses. The old ” I wanted to run but couldn’t find my shoes” or ” I wanted to run but needed new running shorts” excuses are not available. Sometimes life does get in the way of things we really want accomplish. On some very difficult days it seems you just won’t be able to get out the door. If I can get out the door on those days, those are bonus days (see my post – Bonus Runs)

Get what you need, put it by the door, have a easy 4 k run route in mind that won’t be ” too long” or “too hilly” or whatever. When that bunch of people ask me what the key to starting running/exercising is, I always tell them the same thing. Open your front door and walk across the street and back. They always say the same thing back, “what?”. Just get out the door. Once you are out the door you will do more than just walk across the street, I promise you. 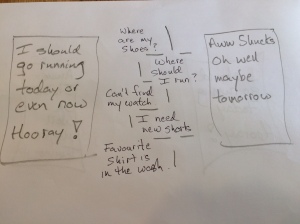 Thanks Sketch Guy for all the amazing columns and for getting me to write this one. He also does a podcast called the Behavioural Gap which is on Soundcloud and is awesome as well.

The Wave – A weekly greeting to all runners

As part of Toronto True Running I am hoping to share some stories, moments and ideas I have related to running. Some of these will be philosophical in nature and others more practical. Most will be centred on the theme of why we run.

Trail running is my time to escape the city within the city. A time to leave the streets and hunt for the wild life. Mountain bikers dominate the trails and are incredibly free and loose. Animals including Deer, coyotes, skunks, hawks, raccoons and on on flourish in the seldom seen spots of the woods. There I also find my place without any limits but my own. No stop lights or impersonal cars. No strollers or driveways. I can run forever almost ever on the single track dirt trails which snake all over the side of the Don Valley. I figure if I were to measure all the trails I know, there might easily be 50 kms but I have not yet explored all. Lots of paths and sidetracks veer off in many places where I have not yet ventured.

Toronto True Running invites you come explore this peace and quiet with us, well me. The groups are limited to 10 per sessions and offer personal attention to your running.

That's my "Wave" for now. I hope you wave back.